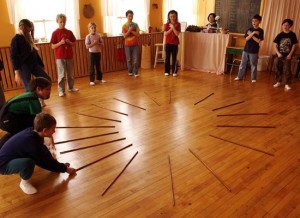 When Rudolf Steiner founded Waldorf Education he had already inaugurated the art of eurythmy and insisted on it being part of the curriculum. Steiner claimed that the complex language of eurythmic movement (there are more than 250 eurythmy gestures to express the phonetic sounds of language and music, to express soul moods, colours, as well as zodiac and planetary qualities) would develop all three types of intelligence; intellectual, emotional, as well as kinaesthetic. In those days he called these three types of intelligence thinking, feeling, and willing, or head, heart, and hands. in the early 20th century the kind of studies to support his claim had not yet been carried out, nor did mainstream culture accept that there was more than one kind of intelligence.

Today many studies have been carried out that verify his statement from 99 years ago. In his book ‘Teaching with the Brain in Mind’, Eric Jensen writes:

The reason for the dissonance between what we know and what we do may be traced back a hundred years. For decades, the educational and scientific communities seemed to believe that thinking was thinking and movement was movement, and each was as separate as could be. Maverick scientists envisioned links between thinking and movement, but their ideas gained little public support. Today we know better. We know that there is a strong connection between physical education, movement, breaks, recess, energizing activities, and improved cognition. It demonstrates that movement can be an effective cognitive strategy to (1) strengthen learning, (2) improve memory and retrieval, and (3) enhance learner motivation and morale.

In times of diminishing financial resources, educators must make hard choices. Do dance, theater, recess, and physical education belong in the curriculum? Can we afford to keep them in the budget? Are they frills or fundamentals? What does brain research tell us about the relationship between body and mind? If movement and learning are connected, we should expect evidence to support the idea. In fact, there is plenty of evidence.’ 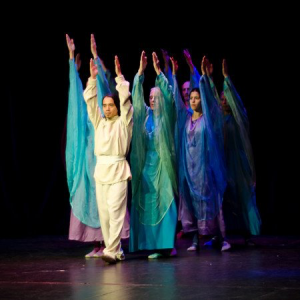 There is, in fact, substantial biological, clinical, and classroom research that supports the connection between motor development and learning of academics. The area known as the anterior cingulate is particularly active when novel movements or new combinations of movements are practiced. This part of the brain area seems to tie some movements to learning of academics. Prescott’s early studies (1977) indicate that if our movements are impaired, the cerebellum and its connections to other areas of the brain are compromised. He says the cerebellum is not only involved in learning, but also in developing ‘complex emotional behaviour’ (emotional intelligence). His rat experiments bear out his conclusions. Rats with cerebellar deficits did worse on maze testing. 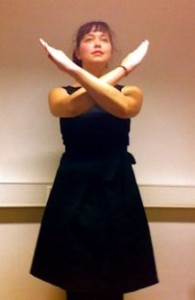 Our brain creates movements by sending a deluge of nerve impulses to either the muscles or the larynx. Because each muscle has to get the message at a slightly different time, it’s a bit like a well timed explosion created by a special effects team. This amazing brain-body sequence is often referred to as a spatiotemporal (space-time) pattern. Researcher William Calvin calls it a cerebral code. While simple movements like gum chewing, brushing or kicking, for example, are controlled by basic brain circuits nearest the spinal cord, complex movements like dance steps, throwing a ball, or doing a science experiment are quite different. Some simple movements like those with sequences, are controlled at the subcortical levels, like the basic ganglia and cerebellum. But new and complex movements shift focus in the brain because there are no memories to rely on for execution. Suddenly, we engage the prefrontal cortex and the rear two-thirds of the frontal lobes, particularly the dorsolateral frontal lobes. This is an area of the brain often used for problem solving, planning, and sequencing new things to learn and do (Calvin 1996).

The word eurythmy comes from the Greek and means beautiful or harmonious movement. It is an expressive art form, also called visible song and visible speech. It is truly the new art form for today. An art form for transformation and healing in every sense of the word, eurythmy is still in its infancy. The expression of the invisible aspects of audible and visible arts really has as its horizon the human being’s ability to perceive it, and to transform the physical body into an instrument able to move in tune with life force and soul. Its aim is to be the poem, the song, the mood, so that it becomes present in our midst. Eurythmy is an artistic movement discipline that uses body, soul and spirit. It does this through a practice of gestures that correspond to sounds of speech and musical tones. These gestures are woven together into choreography. Eurythmy works with the principle that speech and tone are part of the movement-patterns necessary for life.

The costumes worn by adult performers are simple silk dresses and silk veils. The veils, when used skillfully, will make the life force of the movement visible and add feeling nuances to the gestures.

The arm gestures of eurythmy relate to the sounds of speech, to the tones and rhythms of music, and to soul experiences such as joy or sadness. 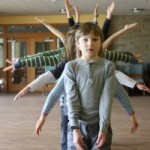 Eurythmy aims to bring the artists’ expressive movement and both the performers’ and audience’s feeling experience into harmony with the content of the composition, be it musical or poetic. Eurythmy is sometimes called “visible music” or “visible speech”, expressions that originate with its founder, Rudolf Steiner, who described eurythmy as an “art of the soul”. Eurythmy is performed to classical music, texts, poetry, or stories.

When performing eurythmy to music (also called tone eurythmy), the three major elements of music – melody, harmony, and rhythm – are all expressed The melody is conveyed through expressing its rise and fall and using the arm gestures of the actual tones. Harmony is expressed through movements of dissonance and consonance, and the mood qualities of major and minor. Rhythm is chiefly conveyed through livelier and more contoured movements for quick notes, slower, dreamier movements for longer notes; in addition, longer tones move into the back space, quicker tones into the front space. Breaths or pauses are expressed through a larger or smaller movement in space, giving new impulse to what follows. Beat is conveyed through greater emphasis of downbeats, or those beats upon which stress is normally placed. The choreography of a piece usually expresses elements such as the major or minor key, the shape of the melody line, the interplay between voices or instruments, and the relative dominance of one or another voice or instrument. 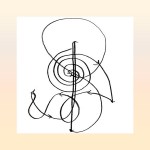 Eurythmy is often performed to spoken texts such as poetry, stories, or plays. Speech eurythmy includes such elements as the sounds of speech, rhythms, poetic meters, grammar, and mood. In speech eurythmy, all the sounds of language have characteristic gestural qualities. It is the audible or phonetic sounds themselves, not the letters of the written language, that are expressed in speech eurythmy.

In addition to the many arm gestures that give expression to the sounds of music and of speech, eurythmy also uses spatial choreography. The choreography may be based on geometrical patterns, on forms that are the expression of grammar in speech, or the pitch of the music. Watching eurythmy choreography is a little like watching synchronized swimming in the patterns that are formed. 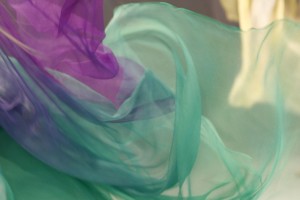 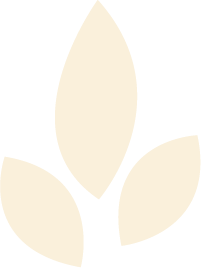